Skip to content
Home » Introduction » A Life of Balance

The Prophet (peace and blessings of Allah be upon him) established a bond of brotherhood between Salman and Abu Darda’ (may Allah be pleased with them both).

Salman paid a visit to Abu ad-Darda’ and found Um Ad-Darda’ dressed in shabby clothes and asked her why she was in that state. She replied, “Your brother, Abu Ad-Darda’ is not interested in the luxuries of this world.”

In the meantime Abu Ad-Darda’ came and prepared a meal for him (Salman), and said to him, “(Please) eat for I am fasting.” Salman said, “I am not going to eat unless you eat.”So Abu Ad-Darda’ ate.

Balance does not necessarily mean giving each priority equal time. Rather, it means that we give each priority what is due to it, and that we do so in the best manner possible. As such, each priority may require different amounts of time at different periods of your life in order to ensure that the balance in maintained.

If one falls ill, for instance, balance would mean spending more time on regaining health and less time on activities that may affect recovery–even if those other things are also within your priorities–such as earning an honest living. Paying less attention to recovery on the justification that work is also a priority could possibly lead to both work as well as health suffering in the long term.

As Muslims, our main priority is to prepare for our inevitable death and meeting with Allah (Glorified and Exalted be He). This priority is addressed in multiple ways.

Islam does not endorse cutting one’s self off from society or the demands of modern living and simply performing ritual worship in seclusion. Rather, worship is anything that is undertaken for the pleasure of Allah (Glorified and Exalted be He), including the specific rituals that He has prescribed for us.

However, Islam does warn us about not getting too engrossed in one thing at the expense of another.

“O you who have believed, let not your wealth and your children divert you from remembrance of Allah. And whoever does that – then those are the losers.” [Qur’an; 63:9]

The rights of Allah (Glorified and Exalted be He) over us cannot be negotiated. We must be diligent and conscious of at least the obligatory deeds. With regard to obeying Allah, not even one’s parents have the authority to prevent such obedience. This is despite the high regard that Islam carries towards parents.

Being obedient to Allah (Glorified and Exalted be He) entails maintaining a balance because He expects us to take care of our bodies and relationships along with earning an honest living and being engaged in ritual worship.

Allah’s Messenger (peace and blessings of Allah be upon him) came to them and said, “Are you the same people who said so-and-so? By Allah, I am more submissive to Allah and more afraid of Him than you; yet I fast and break my fast, I do sleep and I also marry women. So he who does not follow my tradition in religion, is not from me (not one of my followers). [Bukhari]

The Messenger of Allah (peace and blessings of Allah be upon him) is reported to have said, “I stand up to lead salah (prayer) with the intention of prolonging it. Then I hear the crying of an infant and I shorten the salah lest I should make it burdensome for his mother”. [Bukhari]

In another narration “Then observe the fast of David (peace be upon him). Observe fast one day and break it (on the other) day. And he (‘Abdullah b. ‘Amr) used to say: Would that I had availed myself of this concession.” [Muslim]

With regard to interacting with people, we are required to treat everyone well in general. However, there may be situations where one is unable to help two parties at the same time. In such situations, the following order of importance and obligation may be useful to know. 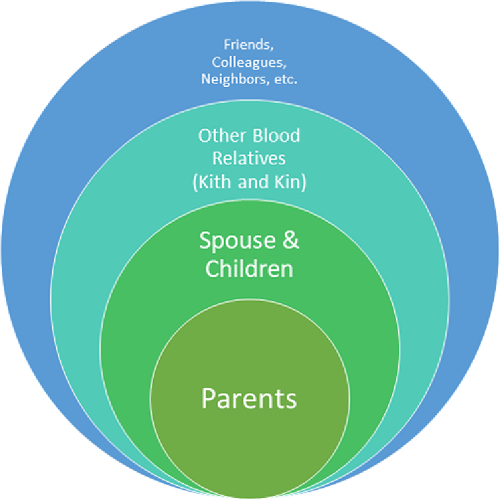 Families are the building blocks of society. When families function well, society functions well. Likewise, the breakdown of families reverberates through society too. Every person in the family has mutual rights as well as obligations. Familial bonds are given high priority in Islam, and this is irrespective of individual religious beliefs. We see in the example of the Prophet Muhammad (peace and blessings of Allah be upon him) and Prophet Ibrahim (peace and blessings of Allah be upon him) that they would treat their kith and kin well and fulfill obligations even towards non-believing family members.

The basis for all family relationships in Islam is compassion and mercy. Maintaining balance within family life includes the financial and spiritual aspects.

Abu Bakr As-Siddiq who used to provide for Mistah some financial aid because of his relation to him, said, “By Allah, I will never give anything (in charity) to Mistah after what he has said about Aisha.” Then Allah revealed, “And let not those among you who are good and are wealthy swear not to give (any sort of help) to their kins men….” [Quran; 24:22] On that, Abu Bakr said, “Yes, by Allah, I like that Allah should forgive me,” and then resumed giving Mistah the aid he used to give him and said, “By Allah! I will never withhold it from him.” [Bukhari]

“A man’s spending on his family is a deed of charity.” [Bukhari]

The financial aspect of family life is not only limited to financial obligations but also voluntary acts of kindness such as giving gifts.

On the spiritual side, it is part of good disposition towards others to have sincere concern for their life in the present world as well as in the Hereafter.

“O you who have believed, protect yourselves and your families from a Fire…” [Qur’an; 66:6]

We cannot take direct responsibility for another’s safety and salvation, but we can encourage one another (with wisdom and compassion) to be educated and aware of beneficial knowledge with regard to this life as well as the hereafter and know the rights towards Allah, ourselves, and each other, and thereafter to encourage one another to act upon that knowledge through gentle reminders at appropriate times.

The Top Five Regrets of the Dying