This is extracted from Surah Asr; the 104th surah in the Qur’an. 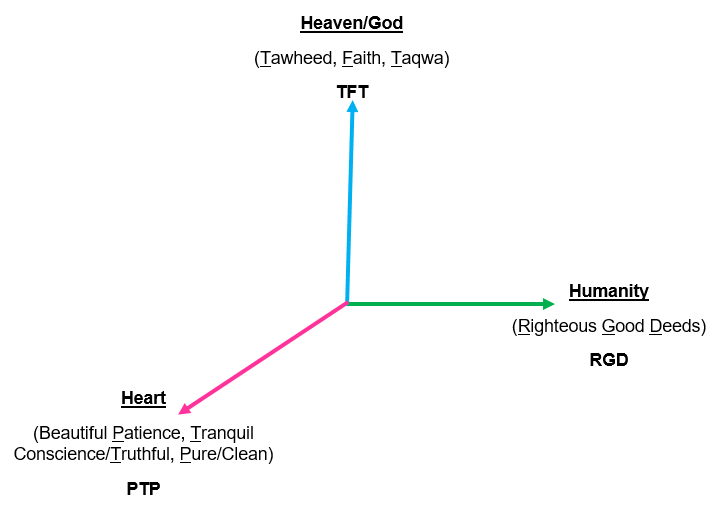 The above diagram can also be interpreted as the 3Ps of success.

An example from the life of the Prophet Muhammad (peace and blessings of Allah be upon him) that encapsulates all three of the above qualities is the incident that took place at Ta’if.

Opposition in Makkah was strong and some of the believers had migrated to Ethiopia to find safety from persecution. The Prophet Muhammad (peace and blessings of Allah be upon him) visited Ta’if with the intention of inviting people to Islam.

When this incident took place, it was already a sad period in the life of the Prophet (peace and blessings of Allah be upon him) as his beloved wife Khadijah (may Allah be pleased with her) and uncle Abu Talib had both passed away in the same year. It was known as the Year of Sorrow.

Being who he was, he could have retaliated. Yet instead of seeking vengeance, despite being offered the opportunity to do so, our Prophet (peace and blessings of Allah be upon him) exemplified his noble character, his peaceful disposition even in the face of adversity and pain, his piety, and his patience with Allah’s will. His supplication to Allah (Glorified and Exalted be He) in that time of pain is captured as follows:

Allahumma ilayka ashkoo
O God to you alone do I complain

Wa hawany alla nas,
And the humiliation I suffer at the hands of my fellow-men.

Ya Arham-Ar Rahimin
O Most merciful of those who are merciful.

Anta rabbul mustadaafeen,
You are the Lord of the Weakened

Wa anta rabbi,
And you are my Lord

Ila man takilny,
To whom would You entrust me?

Ila baeedin yatajahhammuny,
To a distant person who is hostile and antagonistic?

Am ila aduwwin mallaktahu amry,
or to an enemy You have given authority over me ?

In lam yakun bika ghadabun alayy,
If You are not angry with me

Falaa ubaali
I do not care

Min an yanzila bi ghadabuka,
Lest Your wrath descend upon me

Lakal utba
to You is the supplication

Hatta tardha
Until You are pleased

Wa la hawla
And there is no Power

Wa la quwwata
And no Force

illa bika
other than You

This is something to keep in mind when dealing with current issues such as the cartoon-drawing controversy.

He was abandoned by his own flesh and blood, yet he forgave them and treated them well and only responded with peace. He was invited to be promiscuous with a woman of high standing, yet he maintained his piety and feared Allah. He was imprisoned for no justifiable cause, yet he remained patient. The eventual outcome of his life was one of success and recognition, but it took perseverance in holding on to true morally upright character.

[Video] How to Stop Wasting Time